How to decide whether to cancel a concert or singing workshop

It’s your worst fear: despite all your hard work publicising the event, only a handful of people turn up. Or the musical director is taken ill. Or perhaps the venue burns down. 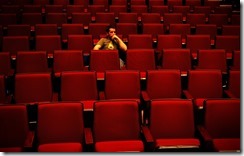 photo by B Rosen

The difficult question is: can you continue or should you cancel? And if you do decide to cancel what’s the best way to do it, and what are the implications? There are no easy answers, but here are some things to consider.

perhaps you should have cancelled

When I first started out I used to run a weekly adult education class called Songs from around the world. One week just two singers turned up. We tried three part harmony. They never came back! Perhaps I should have cancelled.

My first choir did a concert at a folk festival. We managed to muster around 20 singers and we sat in the audience enjoying the other acts until it was our turn to go on. When we stood up, there were only about two people left in the audience. Perhaps we should have cancelled.

I used to run singing summer schools during the long break to keep the singers in my choir engaged. One year I managed to muster loads of new eager singers who turned up to the venue I’d booked only to find it was locked. We went up the road to the local pub and asked to use their function room, but it was booked. So we ended up singing in the pub garden. It put lots of people off and many singers never came back. Perhaps I should have cancelled.

A friend and I were travelling in southern India and booked to see a Kathak show. We bought our tickets in the morning for an evening performance. The performers were already starting to prepare and put their elaborate make-up on when we bought our tickets at 10am. When we arrived at 7pm we were the only two audience members! The performers insisted on doing the show which we enjoyed enormously, but it took some time to get over our embarrassment. Perhaps they should have cancelled.

It’s really hard to decide whether to cancel or not, especially since a lot of hard work has gone into the event, whether it’s a singing workshop or a concert.

Here are some reasons why you might think about cancelling.

There are ways around most of these situations though. For example, if the piano doesn’t turn up, you could just perform acappella. If your MD or soloist is ill, there might be a substitute. If the audience is very small, it still might be worth continuing.

If you do decide to cancel, how do you go about it?

In my next post in this series I’ll be looking at the implications of cancelling, but also some things you can do to avoid cancelling in the first place (or ways of turning it to your advantage).