As we saw last week, many singers struggle with finding (and keeping) their starting notes. 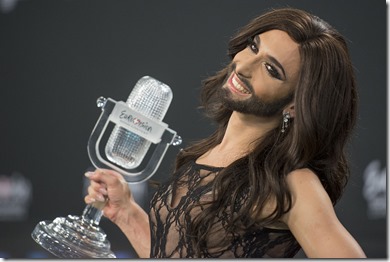 What can make it even harder is if a man is trying to pitch from a woman, or vice versa. Here’s what happens and how you can overcome any difficulties.

[When I started to write this post I thought it was going to be quite short, but it turns out to be very hard to explain in words. It’s much easier if you pop along to one of my workshops and I can demonstrate!]

Growing up we unconsciously make a built-in assumption: women have higher voices than men. Most women speak with a higher voice than most men.

This is a generalisation of course, but it serves us well in most situations.

When it comes to singing it’s a bit more complicated as a person’s singing voice doesn’t necessarily have a clear relationship to their speaking voice.

Many women have low speaking voices but sing very high. The same with men. Prince is a good example of this. Similarly, a man or woman may have a high speaking voice, but be able to sing very low.

Because we’ve internalised this generalisation from an early age, when a woman sings a note to a man and asks them to reproduce it, the man will automatically sing the note an octave lower.

[I’m not going to get into the technicalities of what an ‘octave’ is here, so you’ll just have to bear with me if it’s a term you’re unfamiliar with!]

When a bloke is being silly and trying to imitate a woman (like on Monty Python) he will speak or sing in his light, high falsetto voice in an attempt to be at the same pitch. He is singing very high (too high usually!) in his range and it usually sounds daft.

When a woman sings a note to a man and asks him to reproduce it, he won’t go into that silly falsetto imitation, but will automatically adjust to find a note that is comfortable within his own range.

Similarly when a man pitches to a woman she won’t try to get down as low as him (for most woman that won’t be possible), but she’ll make an automatic adjustment.

All well and good. This usually happens automatically and everything works out fine.

three problems when pitching from the opposite gender

There are three problems that may occur:

One way of understanding an octave is that it’s the ‘same’ note sung higher or lower than another. If you can sing a major scale (like “Doe, a deer” from The Sound of Music), then it’s the top note compared with the bottom note. In some sense they are the ‘same’ (they sound alike in some way), yet one is higher than the other. See also Singing the same note: differently!

2. giving out a note “at pitch” to the opposite gender

Sometimes the note that is needed can be sung “at pitch” (i.e. exactly the same as it would sound if played on the piano for instance, not an octave apart) by the person giving out the note.

A woman can often sing a male tenor staring note at the exact pitch. It will be very low in her range. But the men get confused because they’re used to making an automatic adjustment and singing an octave lower than a woman. They’ll end up in their boots!

Or a man might be able to pitch a low alto note absolutely, singing very high in his range. Again, it might confuse some women in that part who are used to automatically singing an octave higher than a man. They will try to sing really, really high!

This can be a real problem if the person giving out the note can’t get low enough in their range (woman giving out a tenor note, men giving out a low alto note) to sing it in the right part of their own range.

Often in community choirs there will be men and women singing together in the tenor part. This can be very confusing when a starting note is given.

If it’s a group that meets regularly (i.e. not a one-off workshop), the singers will gradually learn what’s going on. For example, in my own community choir I can give the tenor starting note at pitch (high in my range) and the women in the part know to sing low in their range.

If singers aren’t used to this it can feel really weird standing next to someone of the opposite gender whilst singing the same note. The woman will perceive the man is singing much higher than her and the man will perceive the woman as singing much lower than her, even though they’re singing exactly the same note. It takes a while to get used to this.

do you have problems pitching from a man (or woman)?

I’d love to get feedback to know if any of this has helped! I’d also love to hear from you about specific pitching issues you have or if you have problems finding your starting note. Do drop by and leave a comment. Thanks.