Many choirs have a shortage of male singers. Most of my singing workshops attract just 10% men. Is it just a problem here in the UK? 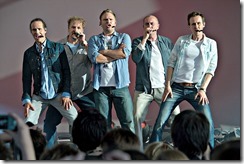 In an attempt to get more men singing, I’m going to share some amazing examples of men singing together from all over the world.

Why don’t more men sing? Who knows??!! I’ve written at length about this before (see Men and singing).

Like the word ‘choir’, the concept of ‘men singing’ often brings up particular stereotypes:

All these sorts of male singing exist and it’s great to have such variety, but they certainly don’t fit every man’s idea of men singing.

If there is not a relevant role model out there, it can easily put men off from singing because they feel that they don’t fit the mould.

So rather than going into the whys and wherefores of why men don’t sing, I thought I’d just share some great examples of men singing together. Who knows, you may find an example that fits the bill. I hope they inspire you!

First up is a performance featuring the famous Georgian folk singer Hamlet Gonashvili. Look past the 70s clothes and moustaches and bad quality Georgian TV recording and just bathe in the beautiful voices and harmonies.

The Malawi Mouse Boys is an eight-member band discovered in 2012 by an American record producer. They spend their days beside a dusty road scratching a living by selling an unusual roadside snack to passing motorists: barbecued mice on sticks. But when no cars are in sight and the trade in mice kebabs is slow, this group of childhood friends bring out their rudimentary guitars and put on an impromptu performance.

And now for something completely different … Sardinian shepherds singing. It’s clear that their singing style has been influenced by hanging around with sheep for too long!

We can’t have examples of men singing without some Welsh men. Plygain singing is a Welsh Christmas tradition.

Here’s some traditional Cornish singing from the sea shanty group Bone Idol from the Scilly Isles.

Hindu men letting rip for the Holi festival. Looks like they’re having fun!

I just love that old style gospel singing. Here are two examples. First up, the Blind Boys of Alabama who have been singing together since 1944.

Now it’s the turn of the younger generation. Here’s the Washed Up Beulah Band.

If you want something with a little more punch, here’s a Maori haka from New Zealand.

And to finish off this edition (I’ll be posting more at a later date in Part 2), here are some Orthodox Jewish men singing Pink Floyd!